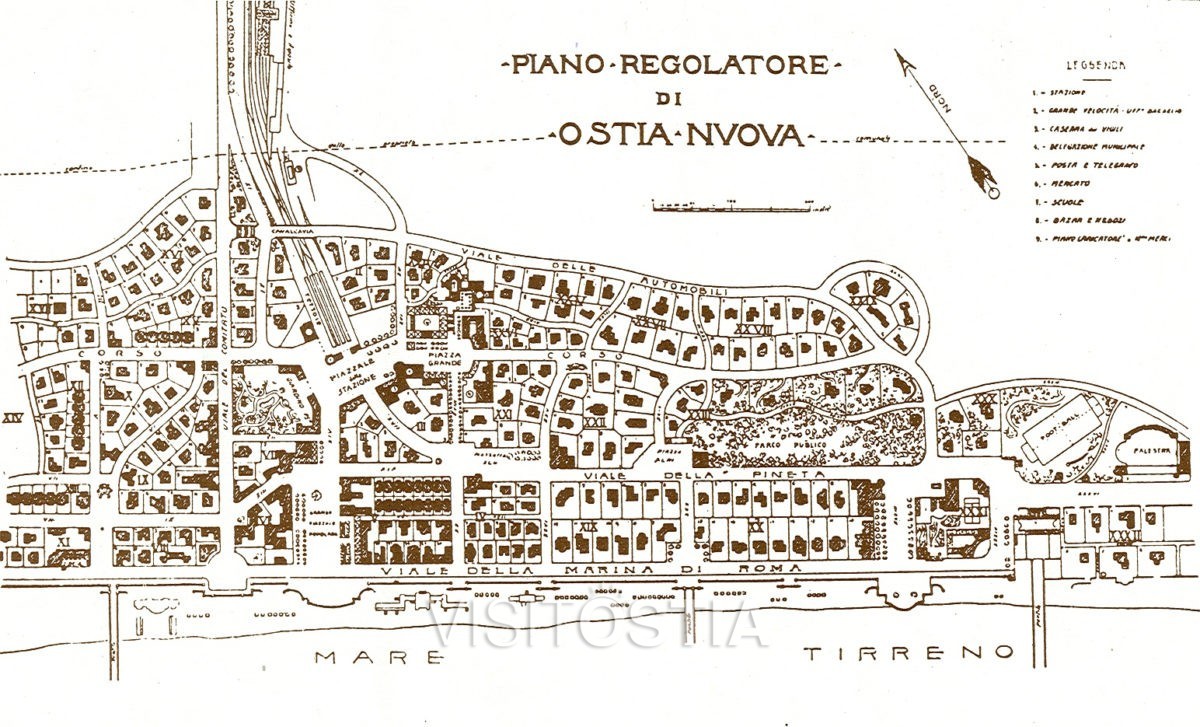 The modern Ostia wouldn’t be there if it weren’t for the reclaiming of the territory, strongly supported by the National Government after the Unification of Italy. The works were implemented with great difficulty by the General Laborer’s Association of the Municipality of Ravenna, from 1884.

The actual settlement was realized due to the tenacity  of  Paolo Orlando, an engeneer from Genova who dedicated his life to fulfill his wish to give to the Capital of Italy a door on the Thyrrenian sea.

The original idea of Orlando is to make of Ostia a maritime town, with a harbour on the Eastern sector and a waterway that would have allowed the communication between the sea and the new industrial area Urbe (planned to be realized next to Saint. Paul’s Basilica in Rome). With that purpose in mind, together with other associates of his, in 1904 he constituted the “Comitato Pro Roma Marittima per il Porto di Roma e la Navigazione del Tevere e del Nera” (Committee Seaside of Rome, for the harbour of Rome and the navigation over the rivers Tiber and Nera), which is immediately entrusted with the necessary funds to extend the via Ostiense from Ostia Antica to the coast.

Two years later the Municipality of Rome obtains the use (indefinitely) of a strip of shore 7 kilometers long and about 70 meters broad and later on in 1908, the right to extend concession to a strip 500 meters broad. On this area in 1916 is introduced the City plan of New Ostia, written by a sub-commission of the Art Association of the Architects of Rome, composed by Vincenzo Fasolo, Tullio Passarelli, Gustavo Giovannoni and Marcello Piacentini, with the purpose of accomplishing multiple tasks: the utopic site of the, never realized before, harbour of Rome and a modern residential beach district, useful for decentralizing the population of the Urbe.

The city plan, inspired in its principles to the international theme of the ‘garden city’, is based on the particular attention to the land morphology, composed of three systems of sand dunes, layered parallel to the shore line.

The roads proceed according to the curves of the layers and move through green areas, while the buildings are mostly small residential houses (2 or 3 storeys); the western sector of the city is site to a more intensive construction type (taller and meant for a more dense residential area). Restaurants, hotels and entertaiment, for tourists and daily visitors, are part of the plan as well.

The Viale del Comitato (the road of the Committee), the extension of the via Ostiense through the urban settlement, splits the town: the western sector, more popular, is characterized by more dense residential buildings as well as by collective buildings (eg. marine colony); the eastern sector is destined to a more high end population, is characterized by green areas both private and public.

The area of the train station, the connection between Rome and Ostia, is central and near to the shore so to favour the movement of people reaching the district. That is also where the main receptive structures are located, mostly bars and restaurants.

Next to the station there’s the civic centre of the settlement, with a church, a market, the schools and the building of the Municipal Delegation. Hotels big and luxurious are meant to host tourists, attracted by the beauty of the town and the beneficial effects of bathing in sea water. Infact the experts believe Ostia to be favourable to health treatments, referring specially to helioterapy and marine iodine therapy, thanks to the position and climatic conditions. It is not by chance that the first building for public use to be part of the city plan is the marine hospice for chidren, dedicated to treating children affected by tuberculosis, built in 1915 on a project by Marcello Piacentini.

Following the directives of the City Plan, the city grows coherently with the eclectic style adopted by the constructions in Rome: the private buildings are mainly roman barocchetto, but also liberty and medieval inspired, also by the nearby Ostia Antica. Of course the most commitment goes to the realization of the buildings for public use, where the projects were entrusted to the most prominent professional figures such as: Giulio Magni (see also the church of “Santa Maria Regina Pacis”), Vincenzo Fasolo (see also the building of the Municipal Delegation), Marcello Piacentini (the railway station and the marine hospice for chidren). At the same time, the first bathing resorts are built and among them the Roma, the first in the World to be realized with reinforced concrete on a project by Giovan Battista Milani, frequented by the aristocracy and by the Capitoline political elite and which immediately became the symbol of the new town.