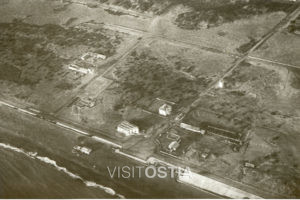 The modern Ostia is only one century old: it thus represents an almost unique and extremely interesting case in Italy, from the points of view of architecture and urban planning, also because the proximity of Rome and the lack of a pre-existing settlement (that could have somehow bond the architecture to a style), have  made of Ostia an ideal place for compositional experimentation.
The first City plan of 1916, inspired to the international criteria of the ‘garden city’, depicted an area of low residential density, strongly characterized by its purpose of becoming a touristic and bathing location: the urban fabric of the city centre, mostly still intact today, grows coherently with the vision and the buildings take inspiration, together with medieval and neo-reinassance styles and the more modern liberty style, also from more gentle suggestions of lesser constructions of the Roman Baroque.

There is no lack of emerging architectures, as well: villas and valuable houses, together with interesting popular complexes of constructions that in 1920’s join the buildings for public use, the projects of which were entrusted to some of the main figures in the architecture scenery of those times, such as Marcello Piacentini, Vincenzo Fasolo and Giulio Magni.

The rise of the Fascism modified the original idea: Ostia it is meant to become the marine district of Rome, the door on the Tyrrhenian sea of the Capital city of a nation projected forward over the Mediterranean. 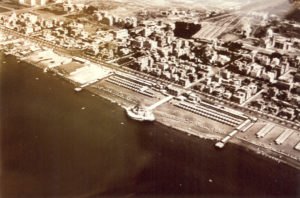 The delicate production of the City plan of 1916 is drastically changed and the original idea of a touristic settlement turns Ostia into a proper city district.

The unlock of the areas previously constrained to the utopic (never accomplished) project of the harbor of Rome, allows the expansion of the city toward East: the greatest part of the Estate of Castel Fusano is acquired and destined, with a new City plan of the area, to a settlement dedicated to nature, sports and recreational activities.

At the same time, the architecture also changes according to the ongoing modifications of the international scenery: after a productive transition phase, which in 1930’s enriches the city with fundamental episodes that the professionals define “other modernity” (as in the works of Mario Marchi and of the youth of Luigi Moretti), in Ostia were realized buildings with clear references to the european rationalist architecture.

The villas and house buildings by Adalberto Libera, Giuseppe Vaccaro, Italo Mancini, Alfredo Energici and Mario Monaco, mentioning just the most famous ones, join the beautiful bathing resorts, designed, among the others, by Luigi Moretti, Enrico Del Debbio, Leopoldo Botti and Virgilio Vallot.

The need to give services adequate to the status of new marine district of the Capital includes the construction of modern and functional buildings for public use: within a few years were realized the post office, on an exquisite project by Angelo Mazzoni, the schools, featuring futuristic experimental solutions by Ignazio Guidi, the O.N.B. by Paolo Benadussi, the firehouse and a large water reserve.

The WWII completely vanishes the desire for experimentation and innovation. The urban fabric of Ostia grows unexpectedly but the quality of the constructions drastically drops; even though still, in the post war season of the architecture of Ostia, there are relevant projects as shown by the beach resort Kursaal, leading place of the roman mundane life during the years of the economic development, the outstanding housing complexes of the INA-Casa “Stella Polare” neighborhood and Alitalia and the beautiful church of Santa Maria from Bonaria thanks to the competition announced in 1967 by the Vicariate of Rome for four new religious buildings to be erected in as many suburban areas of the capital.